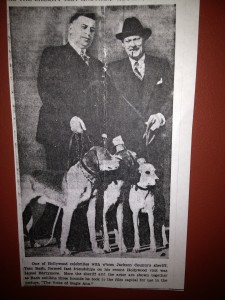 We’ve a shire reeve in our shire

We’ve a chieftain in this town.

We’ve a law that’s not down

Home from the garden party,

Home from the grisly jail

Home to the home that was home indeed,

Drove the sheriff of our tale.

He had chatted with his fellows;

He had seen the bars were locked.

On the foolish ones in durance

For the statues they had mocked.

His car drew south on Forest

With Armour just ahead

When gun shots split he welkin

And a fugitive lay dead.

Out of the dark sprang the Sheriff

With a lawful gun for bane;

Full in the sweep of their lights and lead

He killed the killer’s twain

We’ve a shire reeve in our shire

We’ve a chieftain in our town.

We’ve a law that’s not yet down.

He was employed by Kansas City Power & Light Co. becoming a Supt. of overhead distribution.  He later became classified as an electrical engineer. His many inventions brought in money from sales of some of the patents and also in manufacturing and royalties.  He served as Sheriff of Jackson County from 1938.   In partnership with Mitchell Henderson and James G. Hoover, formed the Federal Engineering and Construction Co. handling millions of dollars in construction.

At his Lost Quarter Lodge, he entertained many of his friends, some of whom, like himself. were fox hunters, duck hunters and outdoor sportsmen of every character.  One of the men who was there on several occasions to take part in the opening of duck and goose shooting season was Governor Forest Smith and a Jackson County judge when Tom was Sheriff who later became President, Harry S Truman.

Tom’s activities as Sheriff of Jackson County and Hollywood adventures as well as gracious host will be covered in coming articles in part taken from the Kansas City Star and Brunswicker newspapers.

We continue the hospitality and hunting at Lost Quarter Lodge.  Bring your gun and hunting attire and visit us.  This season is shaping up nicely with favorable weather and duck breeding numbers. Remember Teal Season starts September 13th.